Shopping around for a new monitor? Getting overwhelmed by the choices? In regards to a TN vs VA vs IPS – which panel type should you choose?

I’m going to introduce each type of panel, talk about its specific pros and cons, and compare it to the other two types. By the end of the article, you’ll hopefully have a firm understanding of the different panel types and be informed to make the best choice for your needs. Let’s dive in!

TN Panel – How Does It Work?

A twisted nematic (TN) panel is one of several types of liquid-crystal display (LCD) panels and is the most-used type of panel in LCD monitors. A TN panel consists of six layers:

TN panels have particularly low response times and high refresh rates because of the ease with which electrodes can be turned “ON” or “OFF” within the panel. They also tend to have a refresh rate around 144Hz, which is phenomenal for their price range.

Most TN panels also achieve a response time of 1ms. This response time makes them ideal for fast-paced gamers and others needing near-constant updates to their displays.

In earlier models, TN panels offered poor color quality and viewing angles, with colors sometimes inverting entirely if viewed from a different angle. TN panels tend to use 18 bits to represent color (versus 24-bit truecolor), meaning that these panels cannot display all of the 16.7 million colors available from a 24-bit display.

As technology progresses, these issues are steadily being rectified. One recent technological change is film super-twisted nematic (FSTN), which is an option that improves the sharpness of images displayed.

For better color, some TN panels use dithering to mimic the range of colors available from a 24-bit display, though dithering is not as effective as a 24-bit display. Ultimately, TN panels generally offer poorer color quality and viewing angles than other types of LCD panel displays.

TN panels were revolutionary in the visual display field when they came into production in the early 1970’s and many of their early benefits are still true today. Some pros of TN panels include:

Despite they useful pros, TN panels have their fair share of cons that make them a turn-off for some people:

Depending on what you use your tech for, these may or may not be big issues for you. For me, I know I wouldn’t want to use a phone with TN panels since I rarely view my phone from a perpendicular angle.

Luckily, phones normally use IPS panels (more on those later). But, for a desktop monitor, a TN panel may make more sense since you tend to view desktop monitors from a perpendicular point.

Who’s a TN Panel for?

Because of their amazing refresh rates and response time, TN panels are commonly considered great for gamers. In reality, TN panels are so commonly used in laptops and desktop monitors that they generally work well for most people. If you do work where visual distinction is essential, though, you’ll want to stick around to learn about VA and IPS panels.

VA Panel – How Does It Work?

Vertical alignment (VA) panels are another popular type of LCD display panel. These panels have liquid crystals that rest in a vertical alignment between glass substrates to block out backlighting and create a clean, black display screen.

When an electric current is applied, the liquid crystals realign into a horizontal alignment that allows light to pass through. Because of the crystals’ ability to block backlighting, VA panels display a deeper black than other panels and display excellent contrast between colors.

VA panels also have wide viewing angles, but they can suffer from an issue called color shifting, which bothers some users while others don’t notice it. Color shifting is the occurrence of an image’s color changing or “shifting” when viewed at one angle versus another angle, which can cause the perception of uneven levels of brightness across the screen.

This occurs because motion may happen faster on the screen than pixels can refresh, leaving a temporary pixel trail across the screen. Nevertheless, modern VA panels are faster than they used to be and high-end VA monitors have 1-2ms response times along with 144-200Hz refresh rate. However, a monitor with these specs will cost you a lot of money ($500-2000).

VA monitors are a good generalist choice with particular pros for visual professionals, such as:

But, as mentioned above, VA panels have cons that may turn away some people. These include:

Who’s a VA Panel for?

VA panels are popular everyday computers because of their good color, wide viewing angles, and moderate price. They’re especially popular for visual professionals because of the contrast ratio.

Though not generally seen as the “gamer’s computer,” some gamers choose VA panels because of their image quality and because their slow response time can be improved. As VA panels continue to improve their response time, they are increasing in popularities, but are not yet as widespread as TN panels.

IPS Panel – How Does It Work?

In-Plane Switching, or IPS, panels are a type of display panel commonly seen in smartphones and professional-level monitors and laptops. Until recently, they were generally the most expensive and least available type of monitor. While their prices remain higher that VA and TN panels, their prices have decreased over time and they have become more widespread than they were.

IPS panels work by aligning liquid crystals in a parallel plane to glass substrates. When the electrical field is applied, the liquid crystals reorient or switch in the same plane.

IPS panels tend to have refresh rates around or below 75Hz, though the highest-end models boast rates as high as 144Hz. Response times are generally around 4ms, but, again, high-end models can have response times as low as 1ms or 2ms.

Where IPS panels shine is their color gamut, which determines how accurately colors are displayed. Combine excellent colors with solid response times, alright-to-great refresh rates, good contrast, and the widest viewing angles available, and IPS panel is a damn-good option. All of this quality comes at a price, though. IPS panels are generally the most expensive panel option, especially if you pay more to have increased refresh rates and response times.

These panels aren’t without their flaws, though. IPS panels are known to emit a glow and backlight bleeding from the corners and edges of the screen. This happens because IPS panels require two transistors per pixel, versus the single transistor common in other types of panels.

These emissions depend on the viewing angle, monitor brightness settings, distance from monitor, and ambient light. This glow and bleeding may distort display quality along the edges and corners of the screen.

example of a backlight bleeding: 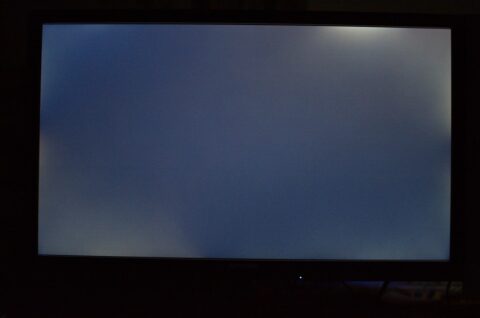 IPS boast a lot of pros, such as:

But they also boast some cons:

Who’s an IPS Panel for?

IPS panels are popular as general professional computers because of their overall good-quality specs. They’re also popular among gamers who are willing to pay extra for higher refresh rates and response times. In recent years, they have become cheaper, making them more accessible.

Now that you’ve had the chance to learn about each of the models independently, I want to draw some comparisons between them.

With their average specs, TN panels have the fastest response time and highest refresh rate of the three models. TN panels are generally cheaper than the other two options, too. They have the smallest viewing angles, the worst contrast, and the worst color gamut. These panels tend to be preferred by gamers who need the speed and by people on a budget. TN panels are the most widespread of any of the three panel types.

VA panels sometimes seem like an opposite to TN panels. They have the slowest response time and have a refresh rate that ranges from the worst option (60Hz) to an alright option that still isn’t as fast as the TN (120Hz compared to the TN’s 144Hz). Because of these slower specs, VA panels commonly suffer from ghosting if used for fast-paced gaming.

They boast an exceptional contrast ratio, a quality color gamut, and a moderate price. VA panels are common choices for anyone wanting good-quality graphics, but especially visual professionals like web designers and photo or video editors.

IPS panels boast the widest viewing angles, good contrast, and a wonderful color gamut. They’re popular among professionals and other people willing to pay more for the overall good specs. A lot of gamers also enjoy IPS panels since they have better graphics than TN panels and are faster than VA panels.

All these comparisons are generalized for each type of panel. If you’re willing to pay more money, you can find IPS or VA panels that have response times comparable to TN panels. Similarly, you can pay to upgrade the graphics of a TN panel, though it’s contrast capabilities may never rival VA panels and its viewing angles may never be as wide as IPS panels.

Individual models for each panel will vary in its specs and different companies hold different quality control standards during manufacturing. While this information is a good, general guide to the various types of panels, you’ll have to look at individual options from various brands to determine which IPS, VA, or TN panel is just right for you.

It’s difficult to conclude that one type of panel is better or worse, overall, than the others. Your choice will depend on your needs from the computer, your brand preferences, and your budget. My hope is that you now know more about each type of panel so you can understand the jargon you see and make your most-informed decision.

If you’re currently looking for a new gaming monitor, make sure to read our full guide on how to choose the best monitor for your needs. Also, we handpicked the best gaming monitors for 2020, so you can pick from the best ones out there.

I hope you enjoyed the post! Did it help you decide on your next purchase? I know some folks hold hardcore allegiances to one type of panel over all the others. Do you have a favorite? Let me know in the comments below!

About Richard Gamin 172 Articles
My name's Richard and over the years, I have personally built many PCs for myself and my friends. I love gaming, programming, graphics designing and basically anything that has to do with computers and technology. If you ever need a hand with anything, feel free to contact me and I will be more than happy to help you out.
Website