Please note: As an Amazon Associate I earn from qualifying purchases. I also work with other affiliate partners and may be compensated from the links below. Details here.

A keyboard is worth a 100 keys… But is the Lenovo Legion K500 worth its price?

When it comes to PC Gaming, what exactly does the Legion K500 bring to your gaming setup? Has Lenovo created an impressive and competitive peripheral that stands up to its competitors in Logitech, SteelSeries, Razer, Corsair and Alienware?

There’s a lot of aspects to look into before purchasing this piece of hardware but right off the bat, I’m excited to dig deeper because it is a pretty good looking product that often comes with a pretty discounted price. But let’s see if that discount is indeed a positive, or an omen of bad things to come…

Performance – A Solid Set of Keys

The Legion K500 is a full sized mechanical keyboard with a 3-zone keyboard layout. It is wired via USB 2.0 using a 1.8m braided cable.

That’s a whole lot of tech speak, so to summarize, it’s a very straightforward, solidly built keyboard. So what’s it like to use one of these keyboards while gaming?

Overall, the Legion K500 has been receiving some pretty positive responses. Thanks to that short actuation point, you’ve got a keyboard that responds quickly to your touch, giving you a gaming experience that’s as fast as you are (maybe even faster). 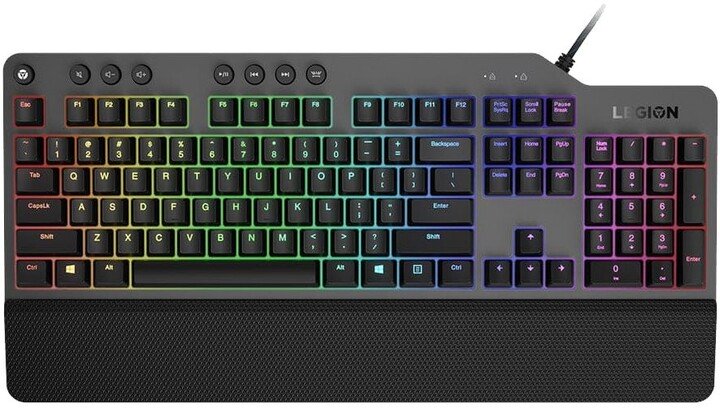 Having this level of responsiveness from the switches is excellent for any game you might be playing, but when it comes to using the keyboard for anything other than that, it’s possible you might find the keys a bit too sensitive and too linear of a press. If you prefer a more tactile switch, then the K500 is not the keyboard you’re looking for.

Especially if you’re not a gamer and need to feel that bump when typing, then you’re definitely on the wrong street. Get out.

Also, if you’re not used to this short of an actuation point, this keyboard will require some adjustment on your part. The Lenovo Legion K500 uses Kalih red switches which aren’t the best brand of switches and ultimately slightly heavier than the Cherry MX Red which have an actuation force of about 45 grams (versus the K500’s 50 grams).

So really, it’s up to your preference in terms of how heavy you like your keys, with the K500 being ever so slightly heavier. I suffer from a pretty quick trigger finger, so getting to have that 2mm actuation point would spoil me in just the right way.

When going in to customize your keyboard using the Legion accessory software you do have a fairly wide range of options which is a great point for any gamer. Unfortunately, you do need to download the Legion software from their website.

A quick positive note to point out is, unlike Alienware’s troublesome control center, Legion’s software is much more straightforward, easier to use and very reminiscent of Corsair’s software layout.

Performance-wise, the full retail cost for the K500 is not exactly worth it especially when compared to the Corsair K55 (depending on what you’re using this keyboard for). Even discounted, the K500 still loses versus the K55 in the price category which even has the same programmable RGB lighting.

Where the Corsair K55 loses is in its membrane keyboard with rubber domes, versus K500’s mechanical switches. While this can be a matter of preference, if you’re a hardcore gamer, you’re most likely going to be after the mechanical switches of the K500. Sorry Corsair…

Unfortunately, Lenovo’s price point is easily outmatched by competitor’s like the Redragon K552 RGB which is both mechanical and selling for only $45. Why might you still want the Legion K500, though? It’s all in the design.

You may also like: Roccat Vulcan 122 AIMO Gaming Keyboard Review

A lot of what I’ve been seeing out in the Legion gossip-sphere has to do with its understated design. Yes, this is a matter of taste, but let’s dive deeper so I can explain why simpler can be better.

Right out of the gate, the Legion K500 is a full sized grey and black matte keyboard with a sleek, minimalist design to it. The keyboard weighs 2.45 pounds, giving it that desirable heft so that it’s not flying around under your hands as you use it. It comes in at 17.45” long, 8.58” wide and 1.3” tall.

There’s nothing too outrageous to its shape or coloring other than of course, the lights, which are subtle and not too bright or in your face. The light comes from underneath the keys, where a keyboard like the Redragon has lights coming from both the lettering on the keys themselves and from underneath the keys, which in my opinion is just overkill.

If I can light up a cave with my keyboard, it’s likely too bright for my game room (but helpful while spelunking). That said, the K500 is missing lights under its media keys which does lead to some fumbling around when you’re playing in total darkness (who doesn’t). The key lights offer 16.8M colors and are fully customizable by simply accessing the Legion software and adjusting them to your preferences.

The keyboard then plugs in with an angled braided USB cord that stays neatly out of the way while in use, but note that it is not detachable. Not a negative, unless you’re in the habit of transporting your keyboard. The angled aspect of the cord is pretty interesting and may have been designed that way so you can keep the keyboard and mouse cords neatly in the same direction. This is an additional touch that certainly wasn’t a deal-breaker without, but just nice to have.

The K500 also comes with a detachable plastic palmrest with non-slip rubber feet. This palmrest has a matching grey/black color and overall looks like a nice addition to the keyboard.

Overall, Lenovo made a pretty stylish keyboard that functions as well as it looks. How does it sound though? Okay, in my opinion, the clicks are too loud. Some people might like that, but for me, it would get on my nerves and likely the nerves of anyone within earshot. This isn’t a dealbreaker, however, just something for me to complain about when it comes to an otherwise solid product.

The Lenovo Legion K500 is made of plastic material so make of that what you will when it comes to durability. I personally think that despite the material, it will stand up to consistent use and the occasional rage typing. Whether it’s a piece of machinery that will last you for years however?

I wouldn’t be too hopeful of that, but it isn’t a point I’m too concerned about. It’s built solidly enough with 50 million clicks that leads me to think it’s a strong addition to give consideration. Would a competitor like Redragon last longer? Doubtful. Would a hardcore gamer tear it up? Possibly.

I have to say that from its sleek design to subtle layout improvements like the angled cord, I’m really liking what I see in the Legion K500 compared to other brands out there. While yes, its price point is on the higher end, it is often on sale so I would highly recommend only purchasing it for its discounted rate (no more than $75).

I’m satisfied with its weight as well as its actuation point. It really makes me want to give it a test drive while playing a first person shooter just to feel the responsiveness of the keyboard. And finally, I like how the lighting is done. Despite the fact that the media control keys are unlit, the LEDs themselves are nicely done – not too bright or in your face. 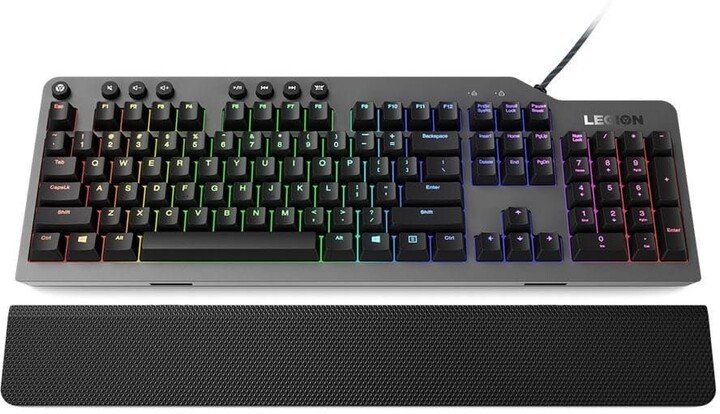 Unfortunately, the keyboard doesn’t include a USB passthrough, but that wouldn’t deter me from giving it a test drive. Would I have liked Cherry MX Red switches? Yes, that would have made the K500 much more appealing, but even so I would still give Lenovo a chance.

I would say overall, the design of the keyboard and fair price point are enough to make me curious about the product. That paired with software that’s straightforward and easy to use, just helps the K500 rack up more points from me.

Lenovo is definitely working hard to become a stronger contender in the PC gaming industry and I feel like this keyboard is a solid addition to their arsenal.

Built well for gaming, it’s a strong piece of equipment that won’t hold you back in a firefight while still looking good on your desk. Whether it would satisfy the hardcore gamer is a more difficult question to answer. I don’t think it would. But this would be an excellent keyboard if you’re a casual gamer like myself and just need something reliable, with a deafeningly loud keyboard to ensure everyone in the house knows how fast you’re slaying your enemies.

I also can’t stress enough how important it is to have easy-to-use software for customizing your keyboard. Unlike Alienware’s Command Center, which requires an “Alienware as a Second Language” handbook to decipher, Legion’s is very straight forward.

I do love getting to customize my gaming experience exactly to my liking, but I don’t like spending an hour just to figure out how to get my keys in order. Just let me play. Legion seems to understand that and took their software layout lessons from Corsair’s book on simplicity.

That said, I take back my earlier assumption that a discounted price was a mark of terrible things to come. I guess I’ll blame the trust issues I got after playing Mass Effect 3 believing the ending wouldn’t be all that bad… Oh boy could I ever be more wrong. But I digress.

I was pleasantly surprised by this keyboard and yes, for a discounted price, I would recommend giving Lenovo’s Legion K500 keyboard a try. I’ll hear you on the battlefield (because your keys are so loud). 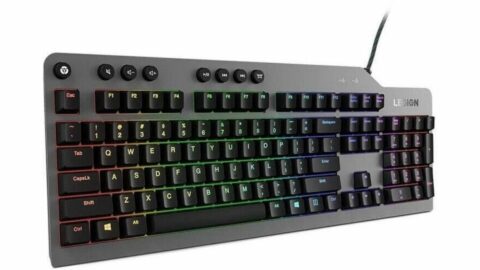 Buy on Amazon
About Richard Gamin 157 Articles
My name's Richard and over the years, I have personally built many PCs for myself and my friends. I love gaming, programming, graphics designing and basically anything that has to do with computers and technology. If you ever need a hand with anything, feel free to contact me and I will be more than happy to help you out.
Website