If I should name one single most important component in a computer, It would certainly be the hard drive – and its capacity. However, when choosing between HDDs and SSDs the capacity isn’t the only factor you should be looking at – There is many more factors to consider.

And that’s why I took the time to do this HDD vs SSD comparison. After reading this you will know exactly what both them excel at, what are they not very good at and most importantly, which one is better suited for your needs.

HDD As a Cheaper Solution

The good old HDDs (Hard disk drives) have been around for around 60 years now. Technology wise, HDDs made a huge progress during this time, however, the concept stayed the same.

Its function is based on cooperation of multiple mechanical components inside of an air-sealed case. The main components are magnetic platters, which spin around and read/write heads, which read or write data on platters upon request. The standard speed of HDDs is 7200 Rpm, but it is common to see both higher and lower Rpm.

The main benefit of HDDs is their low price, specifically the cost per gigabyte – The average cost per GB is anywhere from $0.02 – $0.05 per GB in a 1-10 TB range. Despite being way slower than SSDs, this is the reason HDDs are still viable today – they are ideal for storing  big amounts of data on an external drive, cheap storage for work data in PCs or as backup units.

Even a couple of years ago HDDs were the go-to on a computer market. Nowadays, people are opting more and more for SSDs due to its higher speed, somewhat lower power consumption and the fact that they are lot less likely to fail compared to HDDs.

SSD As a Faster Solution – And More Expensive

SSDs offer the most advanced technology for data storage as of today. Their success lies in a different and more advanced approach to data storage and component layout – there is no moving parts. Instead of saving data on a platter, SSDs have NAND flash memory chips as a storage medium.

If you’re wondering how much faster SSDs actually are compared to HDDs, check out the picture below: 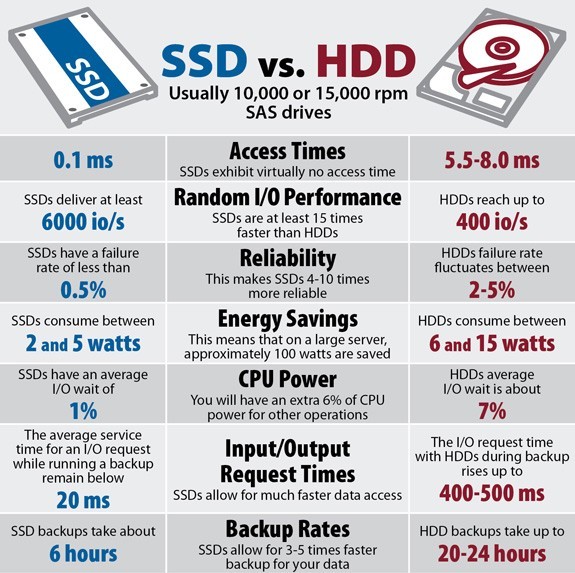 Now you may ask: How much more expensive are they?

Well, the cost of SSDs in general has been shrinking every year since their introduction on the market. The current average cost for GB is roughly 0.15$. Because of that, now you are able to buy SSDs for less than $60. And if this trend continues, HDDs will become less and less popular.

How To Pick a Good SSD

The Speed of SSDs is measured in two metrics. The first of them is megabytes per second (MB/s), the second is the number of input/output operations per second (IOPS). These metrics are stated for both reading and writing. MB/s are arguably most important when shopping for an SSD for your PC, meanwhile IOPS are more important when it comes to building fast servers.

When shopping for a hard drive, I recommend utilizing product reviews and personal experiences.

However, if you don’t trust them enough, make sure to check two most important specs – the sequential read and write speeds and also the 4K random read and write speeds. This will tell you how good an SSD is with managing a big number of smaller (4K) data packages as opposed to managing one big data block.

You may also like: How To Buy A Gaming Monitor – Everything You Need To Know 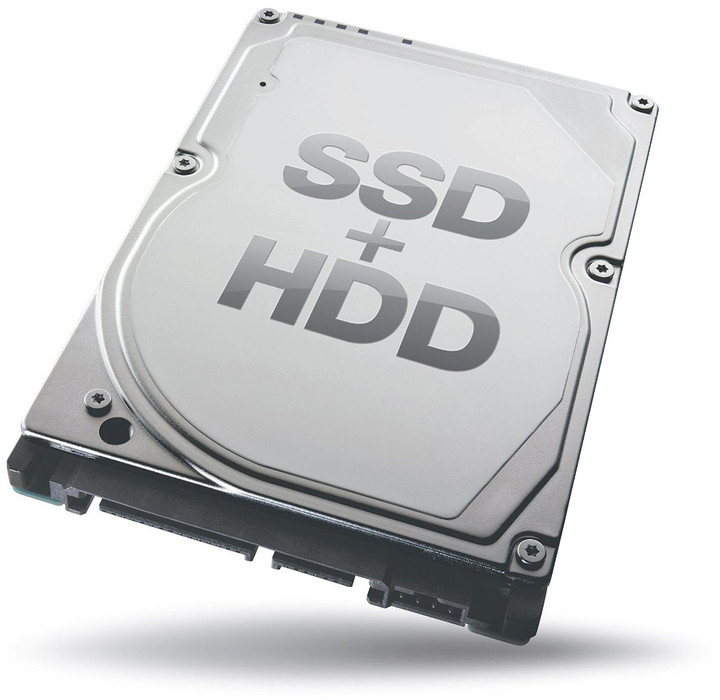 If you never heard of SSHDs before, SSHD stands for solid-state hybrid drive. To put it simply, we can say it is a connection of an HDD as a storage medium and an SSD as an accelerating unit.

The frequently used data are being stored in the SSD part, which are then used for faster reading. In terms of speed, SSHDs provide a compromise between an SSD and an HDD. SSHD are able to provide a faster data processing to an extent, however, given the automatic data placement on the SSD part, they are not as fast as you would want them to be.

One of the examples of a good use of an SSHD is in a laptop with only one 2.5“ drive bay. If the user wants a large data storage and something faster than an HDD, but doesn’t have a big budget to buy a proper SSD, than SSHD is a one of the better options to consider.

Which One Should YOU Use Then?

Now that you know the differences between HDDs and SSDs, choosing the right one for you shouldn’t be a big problem. But I still want to mention a couple of things before you go.

Despite the higher price, you will still appreciate what SSDs can do for you both in a personal computer or a laptop. If you decide to use an SSD as your only drive, I recommend you picking up at least 240GB. With laptop, you need to check if your model supports an SSD upgrade – with PC there shouldn’t be any problem, since every motherboard should support standard SATA SSDs.

If you’d like more performance though, check out the faster M.2 SSDs with NVMe support. They are roughly 7x faster than the classic SATA SSDs. However, the price will be significantly higher.

Very common option we can see a lot nowadays is a combination of an SSD as a primary drive with operation system and the most frenquently used software on it, and an HDD as a data storage and less frequently used programs and games on it.

If you decide to go with this option, ideally I recommend a 240GB or higher capacity SSD and a 1-2 TB HDD.

I hope this has been brought some value and clarity to you, and if you have any questions, feel free to leave them in the comment section below and I will be more than happy to help you out.

About Richard Gamin 174 Articles
My name's Richard and over the years, I have personally built many PCs for myself and my friends. I love gaming, programming, graphics designing and basically anything that has to do with computers and technology. If you ever need a hand with anything, feel free to contact me and I will be more than happy to help you out.
Website