Are you looking for a new laptop to game on and wondering: Do I really need a gaming laptop for gaming?

Imagine you’re at an amusement park and you see a height requirement sign for a rollercoaster that looks like a lot of fun. But unfortunately, you’re not tall enough to ride this ride. That’s kind of what it’s like in the gaming world.

For games, there’s a minimum spec requirement. This is the minimum hardware the game is designed to run on. If your laptop doesn’t meet this requirement, it isn’t going to be able to play the game.

There is a way around this without buying a whole new gaming laptop, although it’s not ideal for most people. But we’ll get into that later.

So let’s get started.

Do I Really Need a Gaming Laptop for Gaming?

No, you don’t need a gaming laptop in order to play games. Nowadays, many regular non-gaming laptops are able to play old favorites and indie games with ease. However, if you plan on playing competitive games or the latest AAA titles, you’ll have to invest in a gaming laptop. Non-gaming laptops simply aren’t able to keep up with modern games due to the lack of dedicated graphics cards.

Can I Use a Normal Laptop for Gaming?

Yes, you can use a normal laptop for gaming, but there is a catch. Your laptop will need to have hardware equal to or greater than the minimum specs listed for the games you want to play. Otherwise, you’re going to have a bad time.

As we mentioned, the main thing most regular laptops lack is a dedicated GPU, and if they do have one, it’s a very low-end model. But even a lower-performance GPU is typically better than the integrated graphics that are in most processors.

This is due to the fact that you can’t have both a CPU and GPU together without hindering both of their full potential. Having a dedicated graphics card allows your laptop’s CPU to function at its maximum potential by not having to supply power and cycles to the integrated graphics, ultimately slowing both of them down.

A GPU, like a processor, crunches tons of data. And with a dedicated GPU, the processor no longer needs to allocate resources to render what’s on the screen.

If you have a decent processor but lack a GPU, your game choices are much more limited. This can be a headache for gamers hoping to play on their laptops. But you still have a couple of options. One is to buy a gaming laptop, which will cost hundreds to thousands of dollars. The other option is to buy an external GPU. 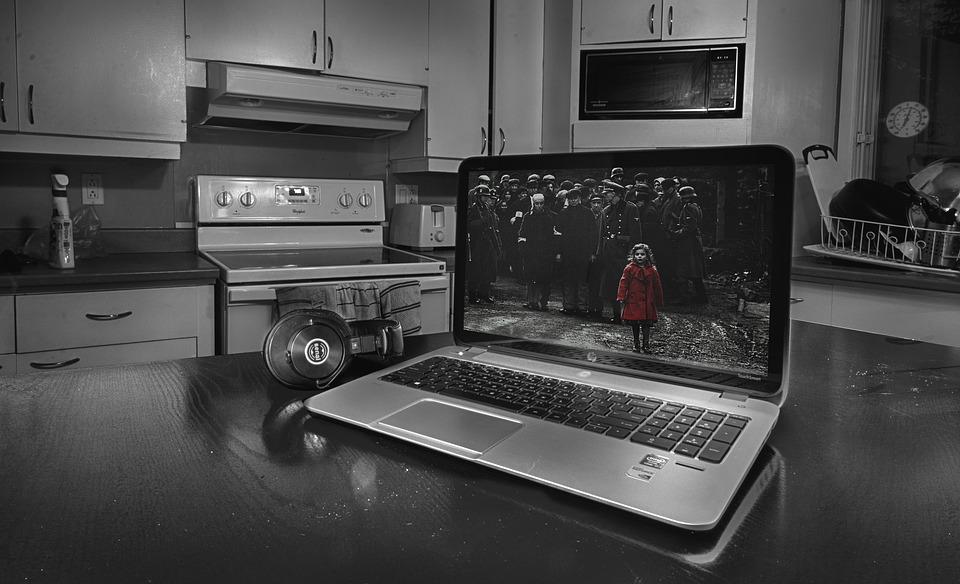 External graphics cards (eGPU) are a Band-Aid solution to this problem. They work by plugging into your laptop and supplying the graphical power required to play more games than your laptop would have been capable of without it.

But the problem is your laptop will need to have a Thunderbolt 3 USB-C port. If yours does not, then sadly, this will not be an option for you. eGPUs are rather expensive. For just a little more money, you can buy a low-end gaming laptop.

Which is ultimately a better financial decision, because if your laptop is getting old, the $400 you’d spend on an external graphics card would be better spent on a new laptop.

What is the Difference Between a Gaming Laptop and a Normal Laptop?

The biggest difference between gaming and normal laptop is that regular laptops use lower-tier components and usually come without a dedicated GPU, meaning they use the integrated graphics that come standard in most processors. This offers performance levels geared towards everyday non-intensive use.

Gaming laptops, on the other hand, use higher-tier components and almost always employ a dedicated GPU supplying the gaming horsepower needed for most AAA titles.

Additionally, gaming laptops produce much more heat than your average run-of-the-mill laptop. So they tend to be a little bulkier to accommodate cooling hardware and improved airflow.

Normal laptops lack powerful cooling options if any at all. A lot of low-profile laptops don’t even have fans or air vents and rely solely on passive cooling. While this helps keep these laptops thin and lightweight, they are the least ideal for gaming. They tend to heat up significantly and can possibly lead to a thermal shutdown if they get too hot.

Furthermore, non-gaming laptops usually come with a measly amount of RAM, usually 4-8GB. With only 4GB of ram, your laptop will have a hard time running many games. New games? Forget about it. 8GB is usually an acceptable amount, but barely in today’s day and age.

Gaming laptops generally start at 8GB of RAM and go up from there. 12-16GB is what we recommend for the smoothest gaming experience. So if you’re looking to buy one, look for gaming laptops with 12GB or higher.

What Makes a Laptop a Gaming Laptop?

Typically, the things that make a laptop a gaming laptop are powerful processors (CPU and GPU) as well as fast, high-capacity RAM, a beefy cooling system, and more aggressive aesthetics with RGB lighting. 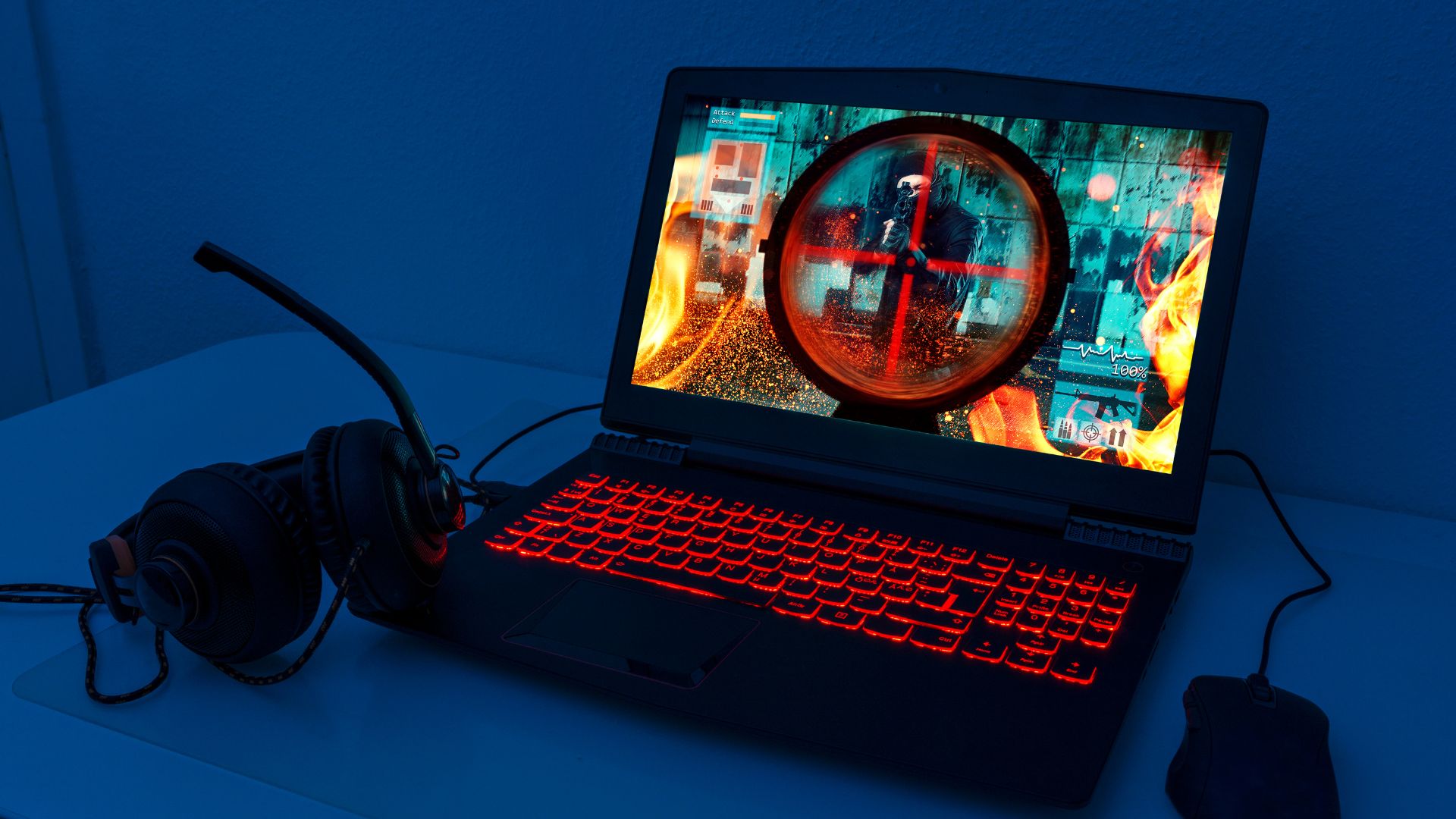 Normal laptops utilize many of the same components but typically forego a dedicated GPU, cooling system, and RGB LEDs. What’s more, an average laptop typically has a much slower and less capable processor and a lower amount of RAM.

Some other differences you’ll see between gaming laptops are also displays, resolution, and features. Many normal laptops use TN (Twisted Nematic) display panels. These panels are cheaper and offer fast response times, typically 1ms, but have a problem with contrast, color accuracy, and viewing angles.

Gaming laptops come with TN, VA, or IPS display panels up to 4k resolution depending on the model and budget level. IPS (In-plane Switching) panels offer crisp and accurate colors while providing a super wide viewing angle. However, they usually have a higher response time reaching up to 5ms.

These panels are best for cinematic or non-competitive games where response times don’t matter as much. VA (Vertically Aligned) panels offer a good mix between the two and offer wide viewing angles (better than TN but worse than IPS), and response times as low as 1ms.

Lastly, gaming laptops have features such as NKey rollover, which allows you to press multiple keys at once without interference. Meaning you can game and hit a bunch of different keys all at once, and the laptop will register them all.

Regular laptops usually have rollover technology as well, but it’s usually dumbed down to only a handful of keys rather than the entire keyboard like many gaming laptops.

Other features include RGB, performance modes, and other little details that make gaming easier or more immersive.

What are the Disadvantages of Gaming Laptops?

Gaming laptops are great for gamers on the move because they allow you to play anywhere. However, compared to normal laptops, their biggest disadvantages are battery life, portability, and loud cooling.

Gaming laptops generally have batteries that drain quickly due to their power requirements. If you have a plug-in nearby, no big deal; just charge your laptop while you’re gaming. But you don’t always have that option, so plan accordingly on trips. That way, you aren’t stuck with a dead laptop in the middle of a game.

Another downside is good gaming laptops can be just as expensive as DIY gaming desktop PCs, though that really depends on the build and laptop. Still, a good gaming laptop will cost up to and easily over $1000.

Overheating is also an issue with gaming laptops. This is from all the energy being pumped into the processors. Even with cooling taken into consideration, the compact design of laptops makes them overheat easily, but that’s just the nature of the beast.

Probably the biggest disadvantage of a gaming laptop over a gaming desktop PC is upgradability. Many laptops these days have their components baked in, meaning they are soldered to the motherboard.

And unless you know what you’re doing, they can not be upgraded. Most gaming laptops allow you to upgrade your RAM, but that’s about it. So when it becomes outdated, the only choice you really have is to buy a new one.

Are Gaming Laptops a Waste of Money?

Gaming laptops are certainly not a waste of money. They’re excellent for gaming and are better than regular laptops for various tasks, like video editing, for example.

However, gaming laptops CAN be a waste of money, and this boils down to whether or not you will be using the laptop for more than just gaming and if you’re on the go a lot. People who travel, whether for work or pleasure, will find a gaming laptop is a great way to play their games, even if they are miles from home.

If you fall in the latter category, a gaming laptop might not be the best option seeing as they are not upgradable and prone to overheating. We would suggest using your hard-earned money to buy a pre-built gaming PC if you aren’t the do-it-yourself kind of gamer.

Pre-built PCs are a great way to get a gaming rig without all the hassle, plus they will typically last much longer than a gaming laptop. But the cheapest option is to build a gaming desktop yourself. This way, you get to select every aspect of the PC, from the processor to the chassis.

But we wouldn’t blame you for taking the easy route. Building your own gaming PC can be a chore. If this sounds like a good option to you, then we suggest taking a look at our article on pre-built gaming PCs for various budgets.

When it comes right down to it, you do not need a gaming laptop to play video games. But your laptop will need certain hardware specs, especially if you want to play newer games on your laptop.

Just keep in mind that while you can play some games on a regular laptop, they will likely need their in-game settings turned way down to be playable. If you don’t mind low graphics settings and only play old favorites, then you don’t really need a gaming laptop.

This brings us to the end of our exploration of whether or not you really need a gaming laptop for gaming. We hope this article was able to shine some light on the topic, and we welcome you to share your thoughts.

Were we able to answer your questions to your satisfaction? If you have any other questions, please leave them in the comments section down below, and we’ll be more than happy to help you out. We love hearing from you!

About Kasimir Wera 18 Articles
Kasimir has been fascinated by technology from a young age. It started when he got a Nintendo 64 for his 7th birthday and took it apart to see what was inside. Now, many years later, that fascination with gaming and technology has only grown with the technological boom he grew up in. Over the years, he has built, upgraded, and repaired many PCs for himself, his family, and his friends. These days, Kasimir lives his best life writing, tinkering with computers, and playing video games with his daughter and friends.