Just got a shiny new motherboard with built-in Wi-Fi 6 and are now wondering are motherboards fragile? Well, luckily, you’re not alone on that thought.

Whether this is your first build or your 20th, we all share that concern as we gingerly remove that fiberglass composite piece from its anti-static bag. Now, the internet has a lot of conflicting information on its fragility, so we’re here to put that to rest in this article.

Motherboards themselves are not fragile, but the components on the board certainly can be. Mobos can be thought of in two parts – the board itself and the components soldered onto the board. These components range from small transistors to different slots and connectors to accommodate your hardware. If pushed in the wrong way or from a bad angle, they can be removed from the board, which removes some of its functionality. The board, on the other hand, is built to last through high temperatures and even some bending.

Can You Break a Motherboard by Touching It?

No, you cannot break a motherboard just by touching it. However, you can fry a motherboard if, for some reason, you are statically charged. Let us break it down for you.

Touching the motherboard poses no risk to it unless you’re applying a significant amount of force. When installing the motherboard for the first time, you will want to avoid pressing on it as you tighten it to your case, but as far as just touching it with bare skin, that is AOK. The threat comes from static charge.

You know how as a kid, you would rub your feet on the carpet to shock your sibling? No? Just me then? Well, that is the kind of static shock I am talking about. A big reason people want to know if motherboards are fragile comes from the fear of frying the board with a static shock.

Now, we don’t mean going out and buying some new high-tech equipment. Here are a few tips to prevent static without breaking the bank:

The above tips are just some of the ways you can protect your board from static shock and allow you to touch it with impunity.

Speaking of protection, we have some additional tips on how to protect your board.

How Do I Protect My Motherboard?

The best way to protect your motherboard is to pay attention to heat levels, handling, and power conditions.

To start, the average Mobo runs at about 120 – 130 degrees Fahrenheit during normal use with a spike to about 180 or so at “max load”. While most modern boards do have a shutoff threshold built into the board’s firmware/bios, the elevated levels of heat can cause irreparable damage to your machine. 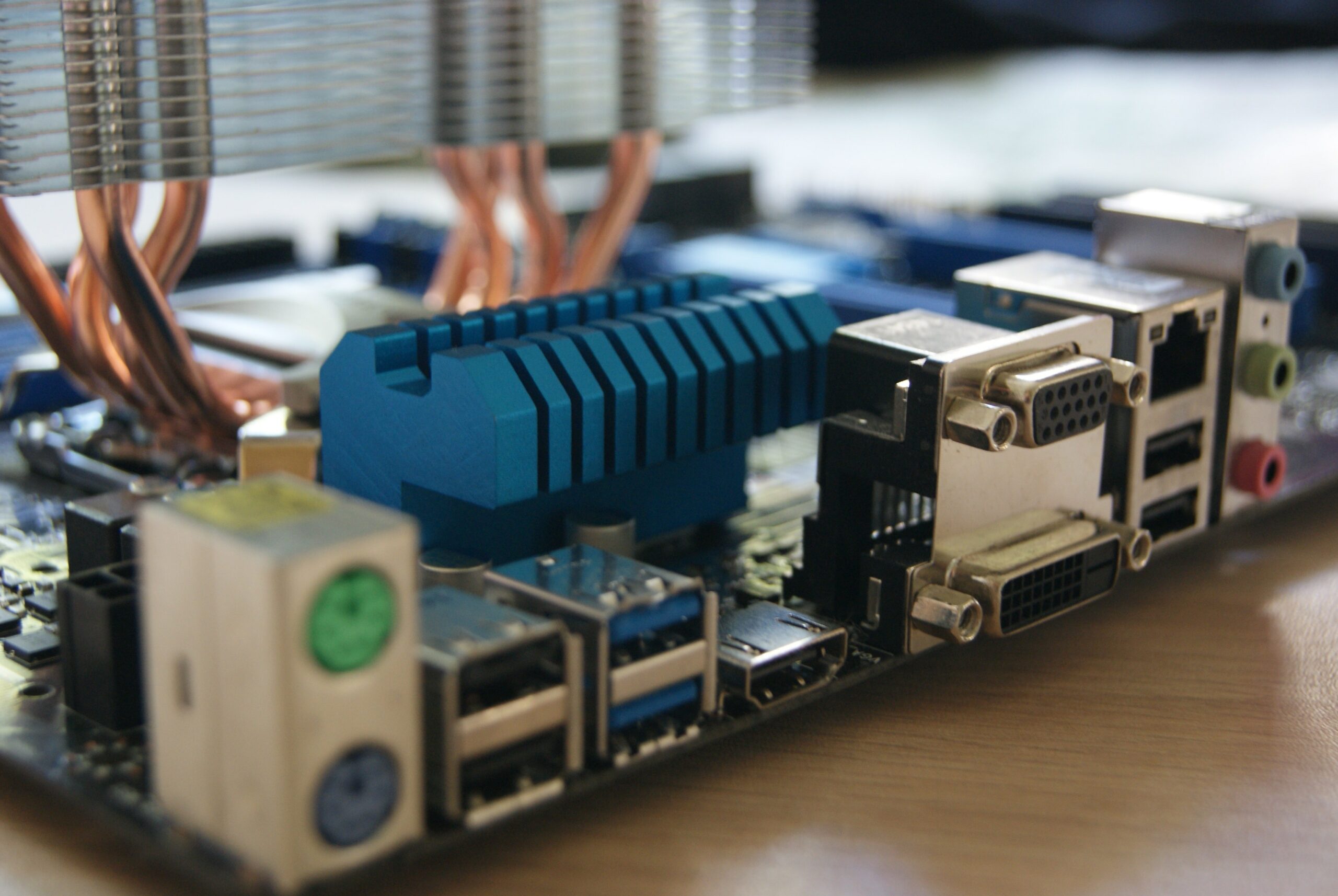 The best defense for high heat levels is to ensure your computer case has enough fans and ventilation to get the heat away from that valuable board. There is heat monitoring software you can install on the PC that allows you to monitor temps throughout your sessions and should give an idea of where your machine is at.

Another good defense against heat is simply to make sure it is always in a cool room and the vents are not being blocked. While this may seem arbitrary, the less room your device has to “air itself out”, the more heat builds up and makes it increasingly difficult to lower its temperature overall.

To battle this, keeping it in an air-conditioned room (or even a room with a fan on) will make sure your board lasts for a long time to come.

Moving on to handling, we covered this a bit when answering if you can break a motherboard by touching it, but to recap:

Let’s discuss that last part a bit more as seriously as first-time builds can be scary! So, when you build your PC, more than likely, you’ll hear the deafening crack of a CPU being snapped to the board, which is normal. What isn’t normal, especially if you’re looking to protect your motherboard efficiently, is the crack from over-tightening the board to the case.

One of the best preventative measures is to avoid overdoing the initial installation, as the more structural damage it has at the time of building, the more it will develop over time. Think of a small crack in a dam growing over time, and you’re right on the money.

Finally, power considerations. This one is straightforward. Completely turn off your computer before handling the motherboard, and use a surge protector! Trust us. It’s worth the investment. Even with the best protection, however, motherboards can and do fail sometimes.

How Likely is a Motherboard Failure?

The likelihood of a motherboard failure is about 2% of the time at purchase (barring any extraordinary circumstances). Compiled from various sources, this percentage equates to about one in every 50 purchased boards failing.

While that number is low, you may be wondering what exactly counts as a motherboard failure, right? When technicians begin to answer whether are motherboards fragile, they will often discuss a Mobo failing or “bricking”. This means that it is 100% dead and unresponsive.

There are two types of dead, though. There’s DOA, and there’s dead after use. DOA or dead on arrival refers to just purchased mobos that after installing everything and booting it up, you get nada. This happens to the best of us and usually at the worst times. If you happened to receive a DOA motherboard, though, typically the retailer or the manufacturer should be able to refund or replace it as long as you reach out ASAP.

Dead after use, however, is not a commonly used term but refers to basically just using your mobo “till the wheels fall off”. We all know people who do that! While motherboards have a long lifespan if well maintained, one bad firmware upgrade, electrical surge, or a GPU malfunctioning can cause the whole board to meet its untimely end.

Following the law of entropy, the longer you use a motherboard, the higher the chance of failure as its parts become worn and more intensive software requirements push it further and further. If your motherboard does happen to fail, though, it may not mean the end. 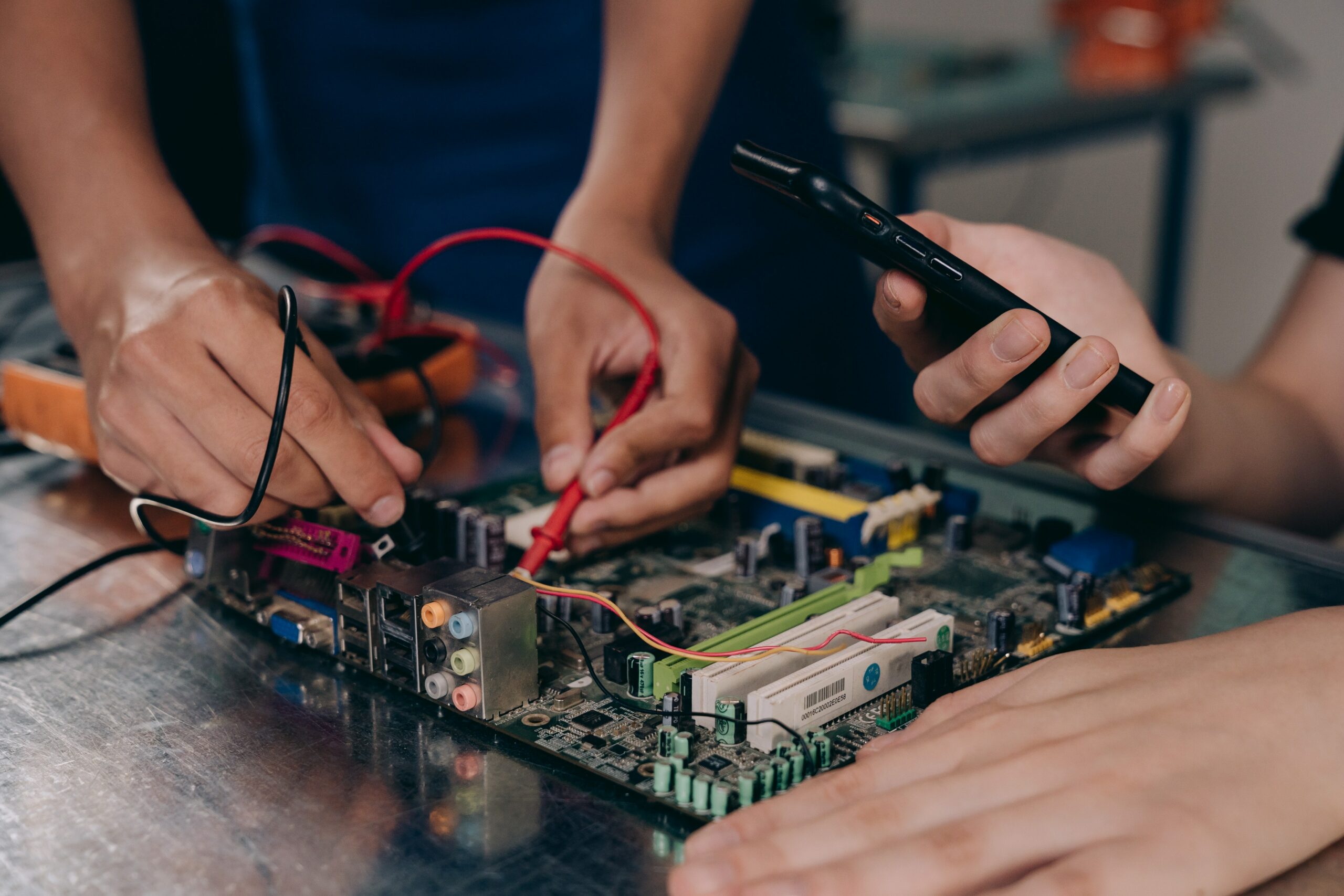 Yes, motherboards are repairable… to an extent. As mentioned earlier, motherboards are a combination of the board itself and components soldered onto it. As such, if either of these fails, it is possible for a trained technician (or a very talented DIYer) to repair it.

Now, before you run out to buy those parts to fix your now-dead motherboard, hear us out! Motherboards are also called the master PCB board. This determination translates to the master printed circuit board, i.e., you should know a little about circuitry before starting to pull your board apart.

If you’re brave enough to attempt it, the second thing to consider is whether the costs justify going all in on it. This will generally come down to what is broken on the board. Is it the board itself? Is it just one component on the board?

If the board is cracked, you’ll have to literally pull every component off, get a new circuit board, then accurately put them all back in place. We don’t recommend doing this as it is way cheaper (and takes less time) to just get a new one. Plus, after all that work, it still may not be functional.

As for a single component, this is doable and should run a lot cheaper (depending on the part). A small transistor can be bought from eBay and replaced for a decent price, while a CPU socket will pretty much require acquiring a board with the same chipset to pull from.

From our experience, though, if the board has died from use versus being DOA, it is usually better to invest in an upgraded board as they will last further into the future. Oh, speaking of which, let’s talk about how long motherboards usually last.

How Long Does a Motherboard Usually Last?

Motherboards usually last about 5 – 10 years with good maintenance. Some can last a lot longer, but it all comes down to use, protection (as we discussed earlier), and of course, support from the manufacturer.

Story time. Our team has an individual who owns a Z420 and has used it for over eight years! It has a few hiccups here and there but still somehow performs just like it was brand new. This is in part due to how companies like HP and Intel approach their enterprise-grade components versus their consumer-grade ones.

While our Z420 is still humming right along, we would be remiss to suggest an MSI, ASUS, or other gaming motherboards would last as long and produce as much continuous performance. This comes down to the intended amount of use, though. The Z420’s motherboard is built to run 24/7 at mid to high levels, while gaming motherboards are built for long sessions, definitely not all day, every day.

While this may sound disappointing, it’s just a little information to help guide you on what to expect. If they are built for lighter activities, they’ll last a lot less under continued use. If they’re built for gaming or work, they’ll last that much longer.

Outside of use, making sure you follow our tips to protect your motherboard will increase its longevity tenfold. To close out, let’s talk about support from the manufacturer.

Support, in these terms, involves bios/firmware updates. Let’s be honest; you have probably noticed that if you buy a motherboard from a few years ago, the updates have already stopped! Why? Well, these companies move with “the speed of software” to try and stay current.

Unfortunately, this also means they stop supporting years-old motherboards to avoid staying on trend. This also means crucial security, performance, and overall stability support patches for your mobo end when the manufacturers decide to move on.

Hopefully, this sheds just a bit more light on how long you can expect motherboards to last and why some motherboards last longer than others.

Now the next time you build a computer, we hope that this article will give you the ability to build with confidence. Just remember to handle your board properly, protect, and maintain it, and you’ll never have to worry about it breaking before its time.

Boards that are given these considerations can last multiple decades, although you’ll probably want to upgrade them to have access to the best performance well before that.

Hopefully, just knowing a bit more about this essential computer component has convinced all you PC building enthusiasts out there to treat your boards a little less gingerly – just don’t beat them up too bad.

If you learn a thing or two in this article, make sure to share it on your favorite social media. Also, if you have a question or comment related to motherboards to share with fellow readers, please post a comment below–We love hearing from you!

About Richard Gamin 174 Articles
My name's Richard and over the years, I have personally built many PCs for myself and my friends. I love gaming, programming, graphics designing and basically anything that has to do with computers and technology. If you ever need a hand with anything, feel free to contact me and I will be more than happy to help you out.
Website